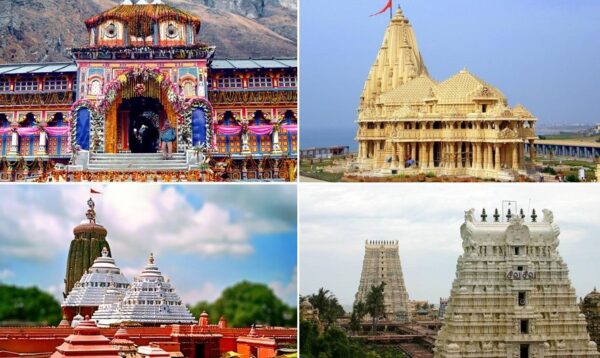 The Char Dham Yatra is a set of four pilgrimage sites in India. Hindus believe that visiting these sites helps achieve moksha (salvation). The four Dhams are Badrinath, Dwaraka, Puri and Rameswaram.

Several individuals wish to visit all the four holy places in one trip so as to ensure that their souls have no trouble crossing over, post death. A trip to Char dham is definitely an adventure in itself as undertaking it means touching all the four corners of the country.

(1) Badrinath, i.e. the Lord of Berry forest, got importance in the Satya Yuga. So Badrinath came to be known as the first Dham in the category of char dhams (4 Dhams).

(2) Rameswaram, got its importance in the Treta Yuga when Lord Rama built a Shiva-Lingam here and worshiped it to get the blessings of Lord Shiva. The name Rameswaram means “God of Ram”.

(3) Dhaam Dwarka, got its importance in the Dvapara Yuga when Lord Krishna made Dwarka His residence instead of Mathura, His birthplace.

(4) Puri Dhaam, Lord Vishnu is worshiped as Jagannath, his Avtar for Kali Yuga.

In the Puranas Hari (Vishnu) and Hara (Shiva) are referred as eternal friends. It is said wherever Lord Vishnu resides, Lord Shiva resides nearby.

Badrinath or Badrinarayan Temple is a Hindu temple dedicated to Vishnu which is located in Garhwal hill tracks along the banks of the Alaknanda River in Chamoli district in Uttarakhand.The temple and town form one of the four Char Dham and Chota Char Dham pilgrimage sites.

The temple is also one of the 108 Divya Desams dedicated to Vishnu, who is worshipped as Badrinath—holy shrines for Vaishnavites. It is open for six months every year (between the end of April and the beginning of November), because of extreme weather conditions in the Himalayan region.

Kedarnath Temple is a Hindu temple dedicated to Lord Shiva, located on the Garhwal Himalayan range near the Mandakini River, in the state of Uttarakhand, India. Due to extreme weather conditions opens only six months in a year. The tradition is that while embarking on a pilgrimage to Kedarnath people first visit Yamunotri and Gangotri and brings the holy water to offer at Kedarnath.

How to Reach Kedarnath & Badrinath:

By Air: The nearest airport is the Jolly Grant Airport in Dehradun. This airport has connectivity with major Indian cities, like Delhi, Mumbai, Bangalore and Hyderabad. Daily multiple flights are available from Delhi. International travellers can reach Indira Gandhi International Airport at Delhi and take a flight for Dehradun from where they can take a drive to Badrinath. There is also helicopter service available from Dehradun to Badrinath, located at an aerial distance of 146 kilometres away.

By Road: It is well-connected by road to all major cities in Uttarakhand and the nearby states and the national capital, Delhi. The National Highway 58 is the main highway linking Badrinath to the rest of India. One needs to change the bus at Rishikesh, Dehradun and other nearby places to reach here.

Ramanathaswamy Temple is a Hindu temple dedicated to the god Shiva located on Rameswaram island in the state of Tamil Nadu, India. It is also one of the twelve Jyotirlinga temples and one of the holiest Hindu Char Dham sites.The temple has the longest corridor among all Hindu temples in India. The temple is located in Rameswaram considered a holy pilgrimage site for Shaivites, Vaishnavites and Smarthas.

The presiding deity, the Lingam of Ramanathaswamy (Shiva), was established and worshiped by Rama before crossing his bridge to Lanka.Rama’s Bridge or Rama Setu, is a chain of limestone shoals from the Dhanushkodi tip of India’s Pamban Island.

It ends at Sri Lanka’s Mannar Island. The ancient Indian Sanskrit epic Ramayana written by Valmiki mentions a bridge constructed by god Rama through his Vanara (ape-men) army to reach Lanka and rescue his wife Sita from the Rakshasa king, Ravana.

How to Reach Rameswaram & Ram Setu:

By Air: The nearest airport is at Madurai (174km).

By Rail: The nearest railway station is the Rameshwaram railway station (3kms from the city). It is connected by several trains with major cities of Tamil Nadu like Chennai, Madurai, Coimbatore, Tiruchirapalli and other places in South India.

By Road: It is well connected to all the main towns. The Pamban Bridge has made Rameshwaram accessible by road from other parts of the South via the NH 49.

The Dwarkadhish temple, also known as the Jagat Mandir and occasionally spelled Dwarakadheesh, is a Hindu temple dedicated to god Krishna, who is worshiped here by the name Dwarkadhish, or ‘King of Dwarka’.The temple is located at Dwarka, Gujarat, India, one of the destinations of Char Dham, a Hindu pilgrimage circuit.

The main shrine of the five storied building, supported by 72 pillars, is known as Jagat Mandir or Nija Mandir. The Somnath Temple is located in Prabhas Patan near Junagadh in Saurashtra on the Western Coast of Gujrat. It is believed to be the first among the twelve jyotirlinga shrines of Shiva.

It is an important pilgrimage and tourist spot of Gujarat. The site of Somnath has been a pilgrimage site from ancient times on account of being a triveni sangam (the confluence of three rivers: Kapila, Hiran and the mythical Sarasvati).

How to Reach Dwarka & Somnath:

By Air: The airport that lies in vicinity is Jamnagar airport known by the name of Govardhanpur airport, located at a distance of nearly 131kms from the Dwarka city. The airport has flight connectivity with almost all other cities of Gujarat and of India as a whole. Another option is taking flight to Rajkot airport.

By Road: Dwarka has a well-developed state highway connecting Dwarka to all other cities of Gujarat such as Jamnagar, Surat, Ahmedabad, Vadodara etc, and even cities of many neighbouring states. Regular buses; both public as well as private buses, ply between these cities and Dwarka and at frequent intervals. Thus reaching Dwarka by bus is not much of a hassle.

The Shree Jagannath Temple is an important Hindu temple dedicated to Jagannath, a form of Vishnu, in Puri in the state of Odisha on the eastern coast of India and one of the destinations of Char Dham, a Hindu pilgrimage circuit.The Puri temple is famous for its annual Ratha yatra, or chariot festival, in which the three principal deities are pulled on huge and elaborately decorated temple cars.Unlike the stone and metal icons found in most Hindu temples, the image of Jagannath is made of wood and is ceremoniously replaced every twelve or nineteen years by an exact replica.

Lingaraja Temple is a Hindu temple dedicated to Shiva and is one of the oldest temples in Bhubaneswar, the capital of the Indian state of Odisha. The Lingaraja temple is the largest temple in Bhubaneswar and the most prominent landmark of the city and one of the major tourist attractions of the state.

By Air: The nearest airport is Biju Patnail Airport which is located in Bhubaneswar almost 60 kilometers from Puri. It is quite easy to access Puri as airways are considered as one of the most convenient and hassle free transport services.

By Rail: It is a last stop on the East Coast Railway which has direct express and other super-fast trains which is well linked with major cities like New Delhi, Mumbai, Kolkata, Okha, Ahmedabad, Tirupati and many more. Some of the famous trains offer direct services to the city which includes Kolkata (Howrah) Puri Howrah Express, New Delhi Purushottam Express.

By Road: Roadways is another one of the most appropriate option to reach as the nearest bus stand is located close to the Gundicha Temple which provides direct connections to Bhubaneswar and Cuttack and one can reach the place in just 10 to 15 minutes.

Bhubaneswar is located at a distance of almost 50 km from the city while Jamshedpur at 333.9 km, Visakhapatnam at 355.1 km, Ranchi at 396.3 km and Calcutta at 403.7 km are few important cities that can be visited from Puri if you have a lot of time. So, there is no problem regarding how to reach Puri. 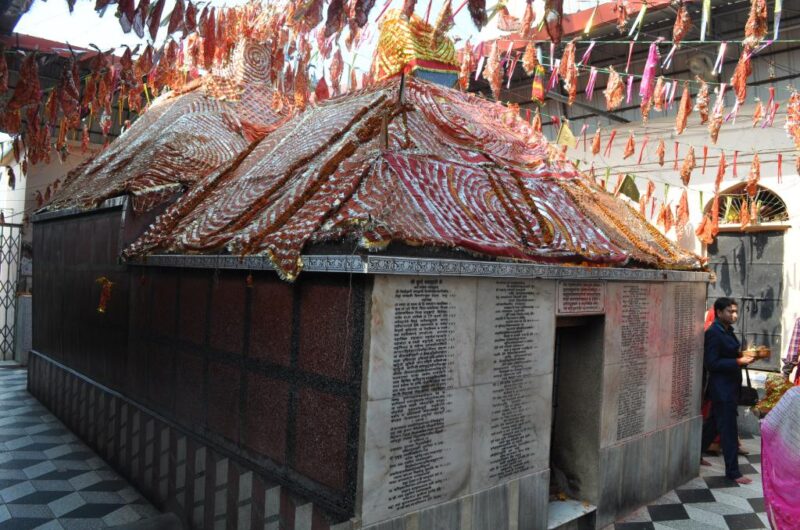 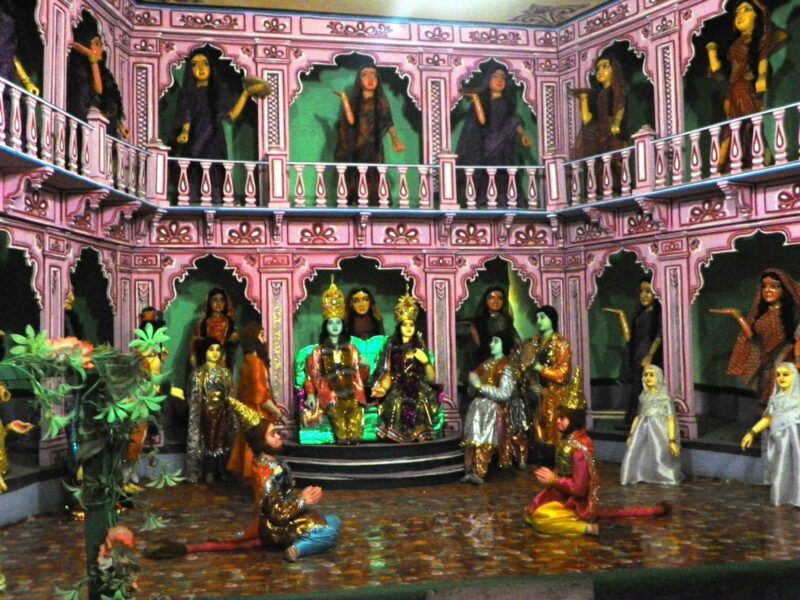