KASHI TOUR PACKAGES – The north part of India features several extremely well-known religious spots – Banaras, Prayagraj, and Ayodhya with a Gaya tour that will take you through the favored religious locations. Along with this, you will explore Buddhist sites – Sarnath Varanasi is so pure that even a dip in the River Ganges, is believed to wash away all the sins.

The city is known to be the land of moksha (Salvation). Sarnath is the place where Gautama Buddha first taught the Dharma. While Prayagraj is an interesting place both historically and with a modern outlook. Gaya has the sites associated with Vishnu and has key importance for the performance of the pind-daan ritual.

Ayodhya (Awadh) is as being the birthplace of Lord Rama and the setting of the epic Ramayana. Owing to the belief as to the birthplace of Rama, it is regarded as one of the seven most important pilgrimage sites for Hindus.

Upon arrival at Varanasi Airport/Railway Station, our representatives will meet and greet you and transfer you to your pre-booked hotel and check-in. After freshen up, drive out for the City Temple Tour- visit New Kashi Vishwanath Temple (BHU) also known as Birla Temple, Sankat Mochan Temple, Durga Temple, and Tulsi Manas Mandir.
In the evening, you leave to attend the majestic Ganga Aarti on the banks of river Ganges. You may watch the aarti from the front while Boating (Direct Payment).After trolling to the streets and having tasty finger street food back to the hotel. Overnight stay at Varanasi.

Early morning at 05:30 am visit Old Kashi Vishwanath Temple, Annapurna Temple, and Vishalakshi Temple in the same campus. On the way, return visit KalBhairav Temple then back to the hotel for breakfast.
After check-out from the hotel, visit Varanasi Silk Market in the heart of the city which is famous for the Banarasi Weaving style. Afternoon drive to Sarnath – the city of Lord Buddha where he came to preach his first Sermon after he achieved Enlightenment at Bodhgaya, It contains the most impressive remains, as well as a modern temple; visit the Mulagandhakuti Vihara(Main Temple), Archeological Museum, Chaukhandi Stupa, Dhamekh Stupa, Dharmarajika Stupa, and various Monasteries. After completing sightseeing back to Hotel. Overnight stay at Varanasi.

After Breakfast check out from Hotel Proceed to Prayagraj After reaching their visit Triveni Sangam for a Holy dips Patalpuri Hanuman Temple, Anand Bhawan & Alopi Devi Temple, after Sightseeing Proceed to Ayodhya, check in to Hotel. Overnight stay at Ayodhya.

After Breakfast check out from Hotel. Then drop to Varanasi Airport/Railway Station for Your Return/Onward Journey. 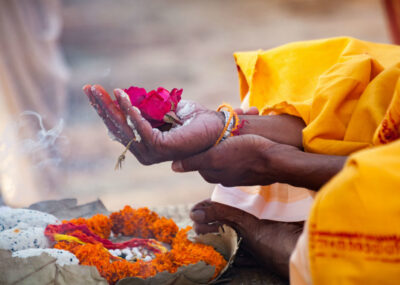 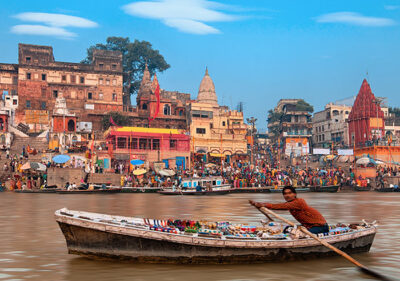 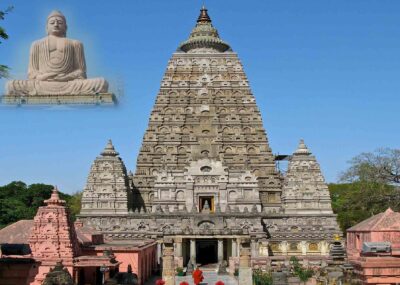